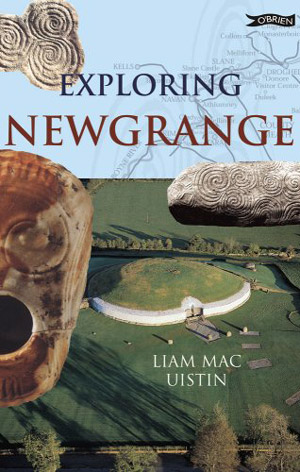 Exploring Newgrange by Liam Mac Uistin - Older than the Egyptian pyramids, older than Stonehenge, for 5,000 years the ancient megalithic tomb at Newgrange in County Meath has housed the remains of Stone Age aristocracy, sheltering the spirits of the long dead from the outside world. This book explores the creation, building and discovery of Newgrange.

Why did these people spend years building this tomb? How did they move huge boulders miles across hilly country and erect them at the site, without the aid of machinery? Modern archaeological techniques have revealed much about the lives of our Stone Age ancestors, but Newgrange still retains many of its secrets. Exploring Newgrange uncovers, in words and illustrations, the extent, and limitations, of our knowledge of this world-famous site.

Liam Mac Uistin is a well-known author and playwright. His versions of ancient Irish stories and legends have been published in the Irish language by An Gúm. His plays for stage, television and radio have been produced in many European countries and in Canada, Australia and New Zealand. His television play The Glory and the Dream won the Radio Telefís Éireann award. His stage plays have been produced at the Abbey and Peacock theatres in Dublin. His stories and plays have received many literary awards. Liam Mac Uistin is the author of The Táin, (O'Brien Press) a hugely popular book for the young reader on this great Celtic epic. He lives in Dublin with his family.

Exploring Newgrange by Liam Mac Uistin is an excellent introduction to Newgrange and the other Brú na Bóinne Megalithic Passage Tombs at Knowth and Dowth. This very readable book includes maps, reconstruction drawings and photographs. With 111 pages this book is certainly not an in-depth academic study of the wonderful and mysterious Boyne Valley Monuments. While the sleeve notes describe Newgrange as "an amazing stone age place of mystery and spiritual worship", the books itself is written in an encyclopaedia type style which will suit readers who are just beginning to learn about Newgrange.