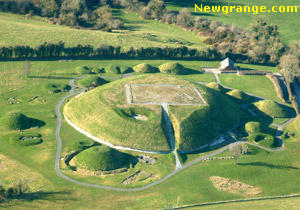 The 5000 year old main mound at Knowth, known as Knowth Site 1 is contemporary with the mounds at Newgrange and Dowth. The mounds are classified as Passage Tombs by archaeologists and are collectively are known as of Brú na Bóinne, they are situated in the valley of the River Boyne in Ireland.

The Knowth site consists of a large mound (Site 1) and 18 smaller satellite mounds. The large mound covering a hectare contains two passages, placed along an east-west line. The passages are independent of each other and each lead to a burial chamber. The eastern passage leads to a cruciform chamber, similar to that found at Newgrange. It contains three recesses and basin stones into which the cremated remains of the dead may have been placed.

The western passage ends in an undifferentiated chamber (rectangular chamber). This chamber is separated from the passage by a sillstone. The entire mound is encircled by 127 kerbstones, many of which are decorated with megalithic art. The Knowth site contains a third of the of megalithic art in all Western Europe. Over 200 decorated stones were found during excavations at Knowth. Many of the motifs found at Knowth are typical; spirals, lozenges and concentric circles. However, the megalithic art at Knowth contains a wide variety of images, such as crescent shapes. Some of the artwork was carved on backs of the stones, these stones could have been reused or maybe the builders intended the artwork to be hidden. 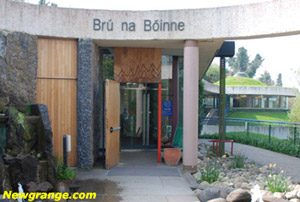 Visitor access to Knowth is only by guided tour from the Brú na Bóinne World Heritage Site Visitor Centre from Easter to mid October. The Visitor Centre is located close to the village of Donore on the south bank of the river Boyne. There is no direct public access to Knowth by road, so if using Satellite Navigation, your destination is Brú na Bóinne Visitor Centre.
George Eogan and his team of Archaeologists began excavating the Great Mound and the smaller surrounding mounds at Knowth in 1962, five years later they discovered the first passage and chamber. Subsequent excavation revealed a second passage and chamber and a collection of decorated stones that comprises a quarter of Western European Neolithic art.  More ...

George Eogan question and answer interview in June 2012, marking 50 years since the start of excavations at Knowth.  More ...

Secrets from the Grave - Irish Times article where George Eogan talks about uncovering 18 satellite tombs around the great mound at Knowth. They also found evidence of pottery, houses and flint artefacts from a pre-passage-tomb stage of early Neolithic settlement around 4000 BC.  More ...

Lunar Maps at Knowth - the carvings on orthostat 47 at the end of the chamber in the eastern passage have been identified by Philip J. Stooke as lunar maps. The right-hand section appears to be a map of the lunar maria. The remaining two sections of the carving are simpler but crudely similar to the first, sharing the overall arc shape of the maria surrounding the lunar central highlands as well as an isolated spot representing Mare Crisium. More ...

Ceremonial Macehead found beneath the eastern chamber tomb at the great passage tomb at Knowth is one of the finest works of art to have survived from Neolithic Europe. More ...

There are 124 surviving Kerbstones at the base of the main mound at Knowth. The kerb is roughly circular and measures 80 metres (east-west) by 95 metres (north-south). The Kerbstones are generally oblong in shape and average 2.5 metres in length.  More ...

A Virtual Tour of Knowth by Bryn Coldrick who was a real life tour guide at Knowth.  More ...

Megalithic Art at Knowth - from Minds or Moons? by Laurie Darcus.  More ... 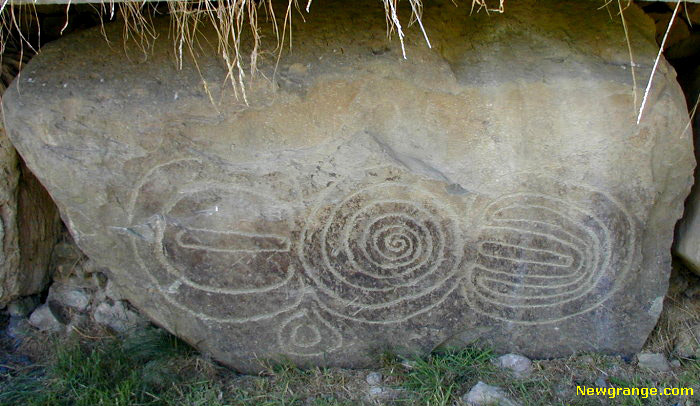 Kerbstone 5 - one of the 127 kerbstones that encircle the base of the main mound.