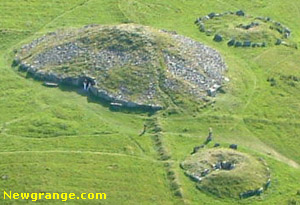 The UNESCO World Heritage Brú na Bóinne sites of Newgrange, Knowth and Dowth are world famous. However there is another prehistoric complex at Loughcrew in County Meath which is often overlooked. Clusters of Megalithic Cairns are dotted around the Slieve na Caillaigh hills at Loughcrew.

At Cairn T the backstone of the chamber is illuminated by a beam of light at sunrise on the Spring and Autumnal Equinoxes.  More ...

Fourknocks is a Passage Chamber Tomb built about 5000 years ago. It is located 10 miles southeast of Newgrange between Ardcath in County Meath and the Naul in County Dublin.

Fourknocks has a short passage leading into a wide pear shaped chamber with three smaller offset chambers. The original roof was probably a wooden structure supported by a central pole. The current concrete roof was constructed in 1952 at the end of a 2 year excavation.  More ...

Battle of the Boyne Site 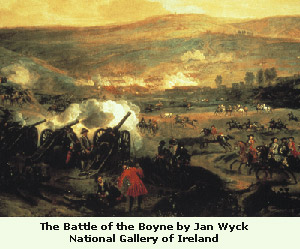 The Battle of the Boyne between King William III and his father-in-law, King James II, was fought in July 1690. Both kings commanded their armies in person, 36,000 on the Williamite side and 25,000 on the Jacobite side - the largest number of troops ever deployed on an Irish battlefield. At stake were the British throne, French dominance in Europe and Religious power in Ireland.   More ... 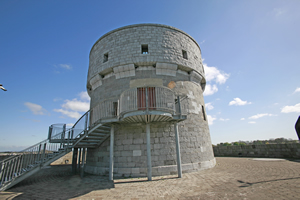 Millmount Museum and Martello Tower are located at Millmount in the centre of Drogheda, County Louth overlooking the historic river Boyne. The area is rich in heritage dating back over 3,000 years while the town itself is over 800 years old.

It is the oldest surviving man made structure in the town with a dramatic history and many stories to tell. Young or old, what ever your interests, you will enjoy a warm welcome and a great day out.  More ... 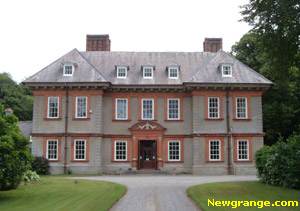 Beaulieu House has been home to the same family since it was built in 1666, a true gem and rare survivor of Irish history. Enjoy guided tours of the house and four acres of walled garden.

Beaulieu estate was formed by the Plunkett family in 1082. The present owner is the tenth generation descendant of Sir Henry Tichbourne governor and defender of Drogheda in the siege of 1641.

Situated on the north bank of the river Boyne, between Drogheda and the coast.   More ...

Personalised Day Tours of Meath, the royal county, rich in heritage and history. Visit the heritage capital of Ireland as your driver brings you from one location to the other to stroll around at your ease.

Take a recommended tour or design your own, choose from the Boyne Valley megalithic monuments at Newgrange and Knowth, Trim Castle, the Hill of Tara, the Hill of Slane, Slane Castle, the Battle of the Boyne site, Loughcrew and many more heritage sites, castles and ancient ruins.