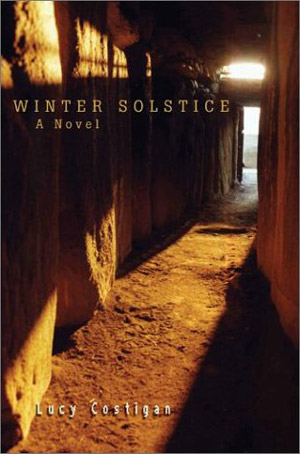 Marion Neilson's dream of a lifetime is finally within her grasp. At dawn she will be admitted to Newgrange, the five thousand year old mound in the heart of Ireland, which is illuminated with the sun's rays just once a year - on the winter solstice. While awaiting entry to the cairn, Marion reviews her tempestuous relationship with the enigmatic Peter, their gradual shift from friendship to explosive love, Peter's gradual slump into hopelessness and depression, the bewildering feelings of rejection, and finally their heart-wrenching separation.

'Winter solstice' explores the agonies and the ecstasies of loving and living, and the individual's attempt to cope with the ensuing chaos. This novel is a rich portrayal of love and relationships, loss and healing, and offers readers deep insight into ancient Celtic traditions of spirituality and rebirth.

Purchase at Amazon.com or Amazon.co.uk

The darkest hour. It had been freezing cold and pitch black at 6.30. Usually it would have been a bitter struggle to leave her warm cosseted bed. This morning had been the exception. She could feel the pent-up excitement tighten its grip on her stomach. The moment was drawing near. This time tomorrow it would be but a memory. The pattern of life: expectation, experience, then memory, with a whole host of feelings thrown in for good measure. She rolled over on her side. There was no light in the room except for the red glaring digits on the clock.

She had slept little that night. This kind of experience almost necessitated a review of one's life, at the very least a review of the dwindling year. A familiar stab of pain pierced her gut. The pain was always greatest on wakening. But this morning she was determined to change the record: the end of the old, the beginning of the new. Her rebirth. Time to arise.

She always loved the road to Slane. Out of the city and on the periphery of that rich and fair land. Castles, ancient ruins, old towns with many a tale to tell, rolling green fields, myths of kings, and legends of heroes. All this really appealed to her deep romantic spirit. She loved the feeling of connection, running her fingers along stonewalls which had been built by other hands many hundreds and thousands of years previously. This was the food of her soul.

Light was beginning to creep through the holes in the indigo sky. The last remnants of moonlight were barely visible. The sky directly above looked promising, cloudless, transparent. Turning to the east however did little to dispel the nagging seeds of doubt. A dark clump of cloud lay stretched across the skyline, foreboding, menacing.

"Come on God" she whispered. "Let it be a clear sunrise!" Nature is magical. A technicolour feast, complete with stereo symphonics, igniting all the senses, meticulous in its precision, infinitely creative in its quest for uniqueness. Wild and ferocious, yet calm and yielding. Innately healing and deeply nurturing. Beauty and mystery. This is our inheritance.

"So, is this the morning when the sun shines into the cave?" The taximan turned to look at his early-morning passenger. "I read about that somewhere recently. It's supposed to be a fantastic sight. I've never been to Newgrange myself. I've made a few trips to the interpretative centre all right. It's a big hit with the tourists, especially the Americans and the Dutch. They can't get enough of Irish ruins. I'd like to go there sometime, when I'm not on duty. It'd be good to bring the kids, show them a bit of culture. They probably know more about it than me anyway. They seem to learn a lot more in school nowadays than we learned in our time. Of course compared to me, you're probably not too long out of school yourself."

He glanced at her again. She hadn't said much since he'd collected her from Rathmines. She seemed lost in her own world. But then not many ordinary folk would be heading for Newgrange at seven o'clock on a cold winter's morning. Still, in his job he'd met plenty of unusual characters, different, not the run of the mill. Maybe that's partly why he liked this work. You never really knew who'd end up in the passenger seat. "Yes. The 21st of December is the winter solstice. It's a special morning for Newgrange." She was in her mid twenties. Long dark hair, tall, well built. Nice face. Dressed in a long blue coat with a black velvet collar. Expensive coat. Nice smell too, of some exotic scent. Black gloves with fur on the cuff. Nice girl. Wrapped in her own thoughts, gazing at the road and the sky. Not one for conversation though.

She had never learned to drive. Friends and family had always been the drivers. She preferred to walk if her destination was within reasonable distance, or an occasional bus would suffice if need-be. This morning's taxi was a rare event. She knew she would never drive. Was it part of some sixties hippie child ideal - throw up all technology and live by nature alone? Not quite. Maybe there was no 'deep' explanation. It was just that she'd never wanted to drive, in the same vane that she'd never felt an all-consuming desire to have a child, although she loved children. Her best friends had always been children. "Slane is just around the corner. Then it's about seven kilometres to Newgrange. We should be there by eight." "Great. That leaves plenty of time."

She glanced to her right as the old stone bridge, with arms stretched proudly over the Boyne, glided into view. The sturdy gates of the Castle loomed ahead. Slane had everything. Medieval ambience entangled in a web of modern-day legends: the Stones, Thin Lizzy, Queen, Neil Young, Dylan, Springsteen. Hot summer days, electrifying rock, dancing barefoot on sunburnt grass. Good times. The taxi-driver veered right from Slane. It was quite a narrow road. Fields, hedges, and tall naked trees lined the route. She noted a signpost for Knowth, pointing to the right. "We turn left up here for Newgrange." A few hundred yards later there was another signpost. This time for Dowth, with the arrow pointing left.

The completion of the trilogy. The darkness was now fading rapidly. The sky's cloak was a patchwork of blues and greys of every shade. Except for the car in front, the road was deserted. Did the ancient people travel great distances to be at Newgrange on this same morning? Would they have gathered in their thousands outside Brú na Bóinne - the mansion of the Boyne? Full-blooded men, women and children, walking by torchlight, huddled together for warmth, praying that the sun would light up the chamber and breathe new life into those who had departed. The ultimate symbol of good things to come in the year ahead.

The Boyne tombs had been known as sacred sites probably for thousands of years. She knew the legends almost by heart. Ancient folklore associated Newgrange with the legendary Tuatha de Danann, the ancient rulers of Ireland. From earliest times it was believed that Newgrange had been erected as a burial place for the chief of the gods, the Dagda mor, and his three sons. The Dagda was noted for his cauldron of plenty which no one could leave without being satisfied, and for his harp which could play three airs: the sleep strain, the grief strain, and the laughter strain. One of his sons, Aonghus, known as the great God of love, was the product of a secret union between the Dagda and Boann, the river Boyne. Aonghus, so the legend goes, asked his father if he could have Newgrange for one day and one night. The Dagda gave him his wish, but Aonghus tricked him by saying that one day and one night meant forever, and so he remained in possession.

The last bend in the road. She caught sight of a white gleaming curve. Another moment and it would come into full view. She held her breath. And there it stood in all its magnificence, high and proud, on a sloping ridge of earth. The white quart surface glinting, jewel-like, in the thin morning light, curving on either side into darkness. The stones of the great circle stood like protecting warriors. Only the chosen few would cross the threshold at dawn. The entrance was lit by two torches. The famous entrance-stone, with its mysterious spirals, was barely visible in the half-light. "Thanks. Will that cover it? No, keep the change. Thanks again." "Enjoy the big occasion". He smiled as she slid out into the cold morning air. "Hope it's worth it." "It will be!" She said with an air of certainty.

Immerse yourself in the rich hertiage and culture of the Boyne Valley with our full-day private tours. Visit Newgrange World Heritage site, explore the Hill of Slane, where Saint Patrick famously lit the Paschal fire. Discover the Hill of Tara, the ancient seat of power for the High Kings of Ireland. Book Now