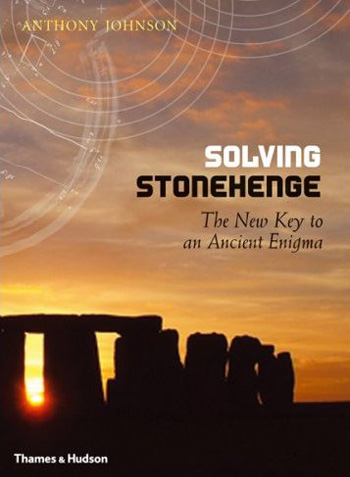 The New Key to an Ancient Enigma by Anthony Johnson

A completely new and convincing solution to the key puzzles of Stonehenge by Anthony Johnson, an experienced archaeologist based in Oxford, England.

His patient detective work and detailed computer analysis of clues hidden within this famous monument can be made to yield remarkable new insights into how the earthwork and stone circle were conceived and laid out.

The story begins with a reappraisal of over 250 years of fieldwork, excavation, and speculation, including John Wood's highly accurate but often overlooked survey of 1740.

It is the most important record of Stonehenge ever made, and the only reliable plan of the monument before the fall of several major stones and their subsequent re-erection in the twentieth century.

The prehistoric engineering skills involved in the construction of Stonehenge have long been recognized, but Anthony Johnson presents for the first time tangible evidence to show that locked within the symmetry of the stones are precise formulae that determined their numbers, spacing, and relationships.

The author explains how the Neolithic surveyors set out the fifty-six Aubrey Holes, four Station Stones, and the thirty stones in the Sarsen Circle; and the significance of the horseshoe arrangement of massive trilithons at the heart of the monument.

The implications are far reaching, demonstrating that the people who designed Stonehenge in all its phases of construction, spanning over 1,000 years, employed simple and elegant geometric rules. Elaborate sightline theories, alignments, and astronomical computations are questioned, allowing the rationale behind Stonehenge and other prehistoric sites, some of which conformed to the same model, to be reassessed.

Anthony Johnson is an archaeologist specializing in geophysics, survey and computer applications in archaeology. He is also a part time tutor at the University of Oxford. He was first introduced to Stonehenge in the 1970s by Professor Richard Atkinson while studying at University College Cardiff.

Solving Stonehenge - The New Key to an Ancient Enigma by Anthony Johnson.

Chapter 4: The Early Period: the Archaeology of the Earth and Timber Monument

Chapter 5: The Archaeology of the Stone Monument

Chapter 8: The Geometry of the Early Monument

Chapter 9: The Geometry of the Sarsen Circle and Horseshoe


Book review by David Keys, Archaeology Correspondent of The Independent - Monday, 26 May 2008.

Five years of detailed research, carried out by the Oxford University landscape archaeologist Anthony Johnson, claims that Stonehenge was designed and built using advanced geometry. The discovery has immense implications for understanding the monument – and the people who built it.

It also suggests it is more rooted in the study of geometry than early astronomy – as is often speculated. Mr Johnson believes the geometrical knowledge eventually used to plan, pre-fabricate and erect Stonehenge was learnt empirically hundreds of years earlier through the construction of much simpler monuments.

He also argues that this knowledge was regarded as a form of arcane wisdom or magic that conferred a privileged status on the elite who possessed it, as it also featured on gold artefacts found in prehistoric graves. The most complex geometrical achievement at Stonehenge is an 87-metre diameter circle of chalk-cut pits which mark the points of a 56-sided polygon, created immediately within the monument's perimeter earthwork.

Mr Johnson used computer analysis and experimental archaeology to demonstrate that this outer polygon was laid out using square and circle geometry. He believes the surveyors started by using a rope to create a circle, then laid out the four corners of a square on its circumference, before laying out a second similar square, thus creating an inner octagon.

The points of the octagon were then utilised as anchors for a surveyor's rope which was used to "draw" arcs which intersected the circumference so as to progressively create the sides of a vast polygon. Indeed, his work has demonstrated that a 56-sided polygon is the most complex that can easily be created purely through square and circle geometry using a single piece of rope.

It is likely that this basic limitation determined the number of sides of Stonehenge's outer polygon – and may also have led to the 56-sided polygon concept becoming important within wider European religious belief. Ancient Greek classical mythology associated just such a 56-sided polygon with Zeus's great rival for divine supremacy, the weather god Typhon.

Johnson's research, published as a book this week, shows that Stonehenge derived its design from geometrical knowledge and features no less than six concentric polygons – a 56-sided outer one built around 2950BC; a regular octagon built around 2500BC) inside that; two concentric (though partly inaccurate) 30-sided polygons built around 1650BC, which were based on a series of hexagons; a 30-sided inner polygon (the sarsen stone ring which was built around 2500BC) also based on hexagonal geometry; and two probable 40-sided concentric polygons (probable former blue stone positions built around 2600BC) that were later modified to 30-sided ones. They also created the famous central stone "horseshoe" utilising the survey markers used to create the thirty-sided sarsen polygon.

The experimental archaeology demonstrates that most of the monument was pre-planned and that the great stones were pre-fabricated off-site and then installed by surveyor-engineers. "For years people have speculated that Stonehenge was built as a complex astronomical observatory. My research suggests that, apart from mid-summer and mid-winter solar alignments, this was not the case," said Mr Johnson. "It strongly suggests that it was the knowledge of geometry and symmetry which was an important component of the Neolithic belief system." "It shows the builders of Stonehenge had a sophisticated yet empirically derived knowledge of Pythagorean geometry 2000 years before Pythagoras," he said. A leading British prehistorian, Sir Barry Cunliffe, from Oxford University, believes that Anthony Johnson's research is "a major step forward in solving the puzzle of Stonehenge".