Tara and the Ark of the Covenant 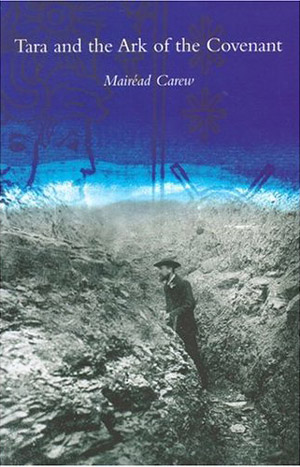 A group known as the British-Israelites dug the Hill of Tara in their quest to find the Ark of the Covenant between the years 1899 and 1902. What were their reasons for doing so, and were they successful? And what was the "Great Irish-Hebraic-cryptogramic hieroglyph" and the Freemason connection?

Arthur Griffith campaigned against the British-Israelite explorations and what he saw as the destruction of a national monument (the first of its kind). He protested on Tara in the company of William Butler Yeats, George Moore and Douglas Hyde, despite being ordered off the site by a man wielding a rifle.

Maud Gonne made her colourful protest against the explorations by lighting a bonfire on Tara and singing "A nation once again", much to the consternation of the landlord and the police. This book describes the story of the British-Israelite excavations on Tara and places them in their archaeological, historical, cultural and political context.

Christmas Day 1900 and across the Hill of Tara in Co Meath, a man and a woman may be seen walking, a sense of purpose influencing their actions. Flamboyant nationalist Maud Gonne in the company of Arthur Griffith, editor of the United Irishman and future co-founder of Sinn Féin, are inspecting recent damage done to the ancient monument site.

Random vandalism was not the issue. The culprits, members of the British-Israel Association of London, could instead claim a far more serious, if bizarre motivation, their quest concerning the legendary Ark of the Covenant.

Founded by Edward Wheeler Bird, a retired Anglo-Indian judge, the organisation became the unified mouthpiece of all sections of the British-Israel movement which believed that the Anglo-Saxon race was descended from the Lost Tribes of Israel, the wandering biblical Hebrews. It held many theories, most of which were wonderfully colourful, even logical in a mad sort of way.

Central to them all however, was an underlying conviction in the British right to rule the world. Implicit amid the theorising was extensive rhetoric proclaiming white supremacy and the usual racial megalomania embraced by any chosen people.

So how does royal Tara, the ancient seat of the High Kings of Ireland fit into this? The British-Israelites, driven essentially by intellectual beliefs, decided the Ark of the Covenant had been buried at Tara and must be retrieved.

It is a great story and well told by Mairéad Carew in Tara and the Ark of the Covenant, published by The Royal Irish Academy. An impressive cast list includes W.B. Yeats, Douglas Hyde, Gonne, Griffith and leading Irish archaeologists such as R.A.S. Macalister, George Coffey and Thomas J Westropp.

There is also the dastardly landlord, Gustavus Villiers Briscoe, who, having been bought by the organisation, sat by heartlessly drinking whiskey as the zealots began their crazy "excavations". There is also an outraged letter to the London Times, signed by a formidable trio: Hyde, Yeats and George Moore.

Nor should history overlook Maud Gonne's clever hijacking of Briscoe's elaborate bonfire planned to celebrate the coronation of Edward VII. Having organised an excursion to Tara for 300 children on the same day, July 13th 1902, Gonne looked at the bonfire and "felt it would serve a better purpose if burnt in honour of an independent Ireland". She lit it and sang A Nation Once Again. Briscoe and the local police were outraged.

Carew examines the story of Tara and the Ark in a lively narrative of meticulous detail and subtle humour. While the archaeological journals of the day gave the episode little space, the newspapers ran with it. According to Carew: "It was the first time that the Irish media had been involved in a campaign to protect a national monument."

But it was far more complicated than that because of the then changing attitudes towards Irish archaeology.

By the close of the 19th century, traditional gentleman Irish antiquarianism had yielded to an increasingly scientific approach. The cultural revival was in full flow. The clash between the British-Israelites and the cultural nationalists at Tara also represented colonialism versus emergent nationalism with their contrasting grasp of symbolism.

While the British-Israelites saw Tara as "a powerfully symbolic site, their 'resuscitated' Jerusalem, and spiritual capital of the British Empire", the cultural nationalists saw the place as a potential capital of an independent Ireland, and both sides drew on archaeology, history and mythology in making their cases.

Although the first approaches regarding possible explorations at Tara were made by the British Israelites in November 1875, all action was confined to a period spanning 1899 to 1902. Considering the amount of devastation subsequently inflicted on Ireland's archaeological heritage in the name of development throughout the 20th century, it is heartening to note the active opposition to excavating Tara.

Among the many interesting quotations used throughout is one attributed to William Bulfin (1864-1910) who travelled Ireland by bicycle and recorded his experiences. A close friend of Arthur Griffith, Bulfin was a shrewd commentator and observed the antics at Tara, not only of the Ark hunters, but also noted the government's evasive side-stepping. He was aware that fear of an exasperated public had been a factor in officialdom taking action but the true heroes were men such as Griffith, Hyde and Yeats and the professional archaeologists.

Of those responsible for the damage at Tara, Bulfin wrote: "Men have been sent to prison for less. But in Ireland there is no plank bed and hard tack for such offenders. They sleep upon the safest mattresses in the country and feed on the fat of the land." Considering he did not have the benefit of planning tribunal revelations to draw upon, his perceptions are impressive.

Elsewhere Macalister, himself a Freemason, writing of the episode years later in his book, Tara: A Pagan Sanctuary of Ancient Ireland (1931), dismissed the British-Israelite theory as "so utterly removed from normal sanity, that piety rather than ridicule should be accorded to those who have been infected with it". On the surface the incident offers yet another tussle between the Irish and the English. Yet there are stranger aspects involved. "The concept of Tara as the centre of a spiritual, religious or cultural conquest of the world is a recurring theme in British-Israelite literature. As Tara was regarded by them as an ancient royal site in the British Empire, the deposition of the Ark there would be evidence that Tara was indeed the spiritual birthplace of the Anglo-Saxon nation." This, the same Tara of which William Wilde wrote: "the memories of Tara have remained a silver thread in the garment of sackcloth he [the Irishman] has worn for centuries". The same Tara described by Hyde, Yeats and Moore as "probably the most consecrated spot in Ireland".

And lest one decide that the entire folly was confined to the English, the British-Israel Association of Ireland was founded, on March 17th, 1897, in the Leinster Lecture Hall, Molesworth St, Dublin. Freemasonry provides another strand to the tale particularly as the Ark was the common symbol for the British-Israelites and Freemasons. If the core of British-Israelite beliefs were based on Protestantism, Freemasonry was, and remains, interdenominational.

Theories and campaigns, subplots and contexts, it is a tale of cultural agendas. Carew evokes the notions of romance and patriotism that dictated the Irish response to the visitors. History and myth as well as all shades of politics have their say as do the cross references such as the influence the 18th century antiquarian Charles Vallancey's shaky ideas exerted over the British-Israelites.

There are also the tensions felt by loyalist Protestants when faced with fellow Protestants embracing cultural nationalism. Carew quotes playwright and Abbey co-founder Edward Martyn, as seeing Freemasonry as a social advancement used by Protestants "whilst we Catholics are correspondingly handicapped by the lack of any organisation capable of doing for us what Freemasonry does for the Protestants". Daniel O'Connell was a Freemason; even so misconceptions, such as Martyn's, endured. It should be conceded, however, that Catholics could not become British-Israelites as it was rooted in Protestantism.

Whatever about the comedy, the arrival of the British-Israelites at Tara was multifaceted. Today the site remains much as it was then, a series of earthworks and mounds. Tara relies on its rich literature and associations.

It clearly captured the imagination of Maud Gonne who experienced so vivid a vision there, she fell to her knees, and reported in an article published less than a fortnight after the visit with Griffith: "I seemed to see shuddering, misty forms gazing curiously at us. A weird procession wound round the great raths where the palaces had stood. Some tossed white arms as they moved in rhythmic circles..." Her companion saw nothing.

While the British-Israelites dreamt of finding the Ark of the Covenant, patriotic Irish poets and writers battled to save a national monument. Many shades of opinion met and fought over the Hill of Tara, as symbol and as fact. However wacky it all seems in hindsight, it is a serious and important, though eccentric, interlude. It is all brought vividly to life here through Carew's intelligent, subtle and nuanced account.