Vale of the Boyne and Royal Meath 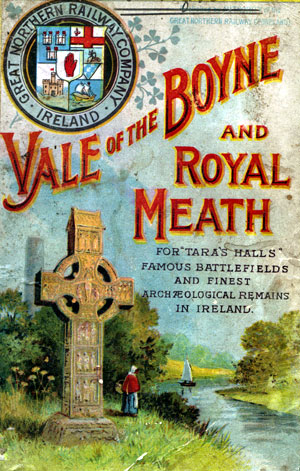 Vale of the Boyne and Royal Meath published by R. Carswell & Sons, Belfast in 1898 for the Great Northern Railway Company.

The Great Northern Railway, connecting the Irish Metropolis with Belfast (the Commercial Capital) and Londonderry, traverses the most fertile plains of Leinster and almost the entire of prosperous Ulster, embracing such a wonderful variety of landscape, and so many localities of surpassing loveliness and attraction to the pleasure Tourist — in mountain, valley, river, lake and ocean scenery — that it may be appropriately styled "The most Picturesque Line in Ireland"

Such districts as Rostrevor (the Nice of Ireland), Bundoran (for the Lake district and Donegal Highlands), and the Vale of the Boyne, are of worldwide reputation for charming scenery, presenting also, as they do, most alluring studies for the Antiquarian, Geologist, Botanist, Naturalist, and Artist.

That district served by thirty-two miles of the main line between Dublin and Drogheda, and forty miles of branch line running westward from Drogheda to Oldcastle, is eminently noted for picturesque scenery. This region possesses so much natural beauty, and abounds with so many objects of historical and archaeological interest, that however frequently the traveller makes the journey he will discover some fresh feature to attract his admiration.

The information contained in this Guide has been most carefully compiled, and arranged in a manner best calculated to meet the requirements of all classes of Tourists visiting the "Vale of the Boyne and Royal Meath."

The Vale of the Boyne

So rich is the Vale of the Boyne in scenic grandeur, and historic as well as prehistoric associations, that Dr. George Petrie, the famous artist and antiquary, has stated that "Among the many scenes of beauty with which this fair Island abounds we know of none which combines such variety of the former or so many objects of the latter as the pleasant Boyne." A drive of 20 miles covers the districts embracing the Boyne Valley Tour. A Coach runs daily from the 1st May till 30th September in connection with the morning and evening trains from and to Dublin and Belfast.

A pleasant drive of about one mile from Drogheda, along a good road skirting the lovely Boyne, brings us to Oldbridge, the scene of the famous Battle of the Boyne, which was fought on the 1st July, 1690, between the troops of William, Prince of Orange, and James II. of England. Both armies, it is stated, numbered about 30,000 men. The Williamite forces were on the north side of the river, and the Irish under James on the left. The battle ground is marked by an obelisk 150 feet high, erected in the year 1736, bearing an inscription to the " Glorious memory of King William III., who did secure to us and our posterity our liberty, laws, and religion." It stands on the spot where William's forces commenced the attack, he having led them down to this point along the road known as King William's Glen — a picturesque dell — which runs in a northerly direction off the main road from Drogheda. At this place his soldiers, in obeyance to orders, plunged into the river and crossed to the opposing army, their advance being covered by a brisk cannonade from guns placed on the rising ground on the north side of the river.

William himself crossed between the islands situated below the bridge, and a third crossing was effected by a body of William's cavalry by the bridge of Slane, having been despatched thither to attack the enemy's left wing. (The original bridge still stands). This flank movement had the desired effect, and after a stubborn resistance James' troops were worsted, and retreated from the held.

Close to the Boyne obelisk William nearly lost his life from a shot fired by a party of the Irish who had trailed a field piece to cover the person of his Majesty. The ball grazed his shoulder and killed a man standing a little behind. A pillar, 90 feet high, commemorates the death of Schomberg, William's General. It is erected on the spot where he fell, by a random shot of one of his own men. Walker, the heroic defender of Derry, was also killed.

King James witnessed the battle, or a portion of it, from the old Churchyard of Donore, about a mile distant from the ford, and the Irish Army fell back on Donore after the battle. James no sooner observed the retreat of his forces than he rode with hot haste to Dublin, where, on arriving at the Castle, he complained to Lady Tyrconnell of the Irish having run away from the Boyne. "Not so fast as Your Majesty," was the spirited rejoinder, "for you have won the race." After a night's rest he galloped as fast as his horse could carry him, riding, it is said, 100 miles in one day, to Waterford, where he at once embarked for France. Continuing along the north side of the river, we have on our right the demesne of Townley Hall, and, keeping to the left, a drive of about two miles brings us alongside Dowth Hall Demesne, and to the Dowth Mound.

Here we have one of the Wonders of Ireland in the shape of a mighty cairn, or prehistoric sepulchre. It is not so large as that of Newgrange, but, says Ferguson in his "Rude Stone Monuments," "more richly and elaborately ornamented, and probably more modern than its more imposing rival." The entrance is by a passage 27 feet in length, walled in by blocks of stone of cyclopean magnitude, with enormous slabs for a roof. At the end of this passage is a cruciform chamber, with a number of small crypts, connected on the south side by another passage. The Tourist should take particular note of the mystic carvings which the lapidary giants so profusely exhibit, and the large stone urn or sarcophagus in the centre. The Mound was opened in 1847, and in it were found a large number of human and other bones, some half burnt and others entire, and in addition several rudely made articles of stone, bronze, and iron. At a distance of about 300 yards to the east of the Mound will be found the ruins of a church, St. Bernard's Well, and other antiquarian remains. Proceeding along the same road as brought us to Dowth for about a mile and a half, and turning to the left halfway, we soon reach the famous Newgrange Mound.

The Newgrange mound is 70 feet high and covers an area of about two acres. It is chiefly composed of small stones and earth, weighing, as has been estimated, 180,000 tons. Originally it was surrounded by a circle of huge pieces of rock, but only 10 of these now remain. The sepulchral tumulus of Newgrange is one of the most remarkable monuments of human skill and labour to be found in the world. It has long excited the interest and admiration of antiquaries of almost every civilised nation. It is probably of greater antiquity than the Pyramids of Egypt and well nigh approaches them in grandeur.

The chamber is approached by a passage running nearly north and south, 63 feet long, three feet wide, and at the entrance three and a half feet high, rising to six feet, where the central chamber is reached. The tourist will have to move forward some distance on his hands and knees to reach the great sepulchral chamber, but the guide will lead the way with a light, and little difficulty will be experienced in accomplishing the task. The chamber, which is cruciform, is 25 feet high in the centre. It has three recesses, one opposite the entrance, one facing west, and one east.

These are seven to nine feet in height, width, and depth. The walls consist of enormous stones placed upright with slabs horizontally placed across their tops. The stones are so arranged that each layer projects further towards the centre than the one below, till one stone is sufficient to close the roof. Many of the stones show most elaborate carvings, supposed by some antiquarians to be symbolical. They consist of lozenges, spirals, concentric circles, chevrons, and cup markings in profuse variety. Within the niches of the great central chamber are several large saucer-shaped blocks of stone, supposed to be rude sarcophagi. Some of the stones forming the chamber appear to be water worn, and it is thought have been brought originally from the bed of the Boyne.

The Mounds at both Dowth and Newgrange are supposed to be the sepulchral chambers of Irish potentates who lived centuries before the Christian era. Owing to the discovery of iron knives here it is believed that they were plundered by the Danes about the ninth century. From the tops of both Mounds can be had one of the finest views of beautiful landscape in Ireland. Beneath the eyes of the tourist lies the richest portion of the plains of Meath, and in the distance can be seen the Carlingford Hills and a long range of the Mourne Mountains stretching into the sea.

From Newgrange we continue our journey by car to Mellifont Cistercian Abbey — founded in 1142 by Donough M'Carrol, Prince of Oirgaillach. These picturesque ruins consist of a stately gate tower and the time-stained walls of the Abbey of the richest period of pointed architecture. The building is octagonal in form, and is considered to be, for beauty of structure and finish, the finest abbey ever erected in Erin by the Cistercians. The glen in which the ruins stand possesses great natural beauty, and altogether the spot is of exceptional interest to the artist and archaeologist. It was in this retreat that Devorgilla, wife of Prince O'Ruarc, whose abduction by Dermot MacMurrogh, King of Leinster, led to the Anglo-Norman invasion of Ireland, closed her unhappy career.

Some remains of her cell, or supposed prison-house, are still extant. Moore, in one of his charming lyrics, thus refers to the flight of this lady:—


'The valley lay smiling before me,
Where lately I left her behind;
I sighed and something came o'er me
That saddened the joy of my mind.

I looked for the sign which she told me
Should glow when her pilgrim returned,
And though darkness began to enfold me
No light from the battlements burned.

I flew to her chamber, 'twas lonely
As if the fond tenant lay dead;
Oh! would it were death, and death only;
But no, the fair false one had fled.

Three miles from Mellifont will be found the ancient monastery of Monasterboice, founded in the fifth century by St. Bute. It was inhabited down till the eleventh century, when it was burned. The remains here to be found consist of two churches, a round tower, and three elegant crosses. The Round Tower, which can be closely inspected by means of ladders up to the summit, is 110 feet in height, and from the top chamber can be had a charming view of fertile Louth. The most attractive objects of antiquity are the crosses, dating from the ninth century. Archaeologists hold that two of these, in point of design and richness of their sculpturings, surpass all similar works of that class to be found in the world. The carvings, which are peculiar to Ireland, illustrate passages of Scripture. 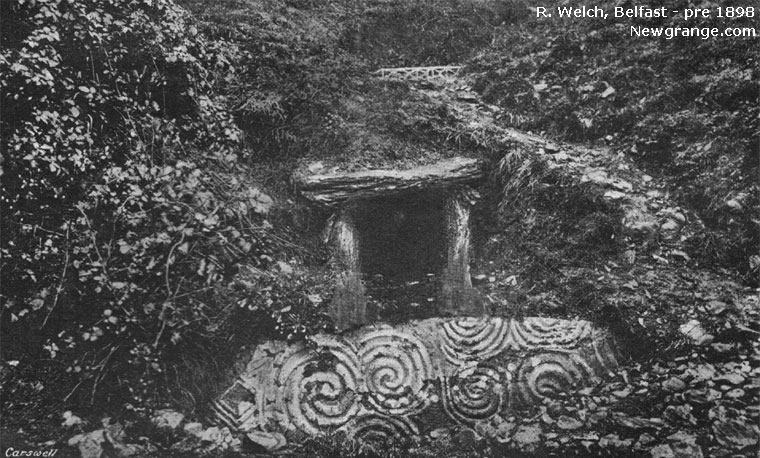