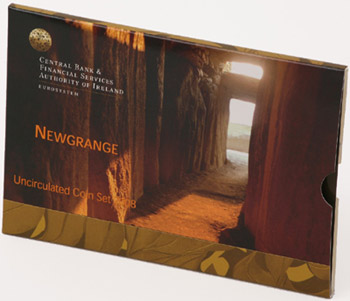 Newgrange was the theme for the 2008 Central Bank of Ireland uncirculated Coin Set, the sixth and final mint set in the Heritage of Ireland series.

The set features the ancient passage tomb at Newgrange. Built over 5000 years ago, the burial chamber is entered through a long stone passage with the whole area being covered by a huge mound. The tomb is bordered by 97 kerb stones bearing decorative patterns in the Megalithic art style.

The set was officially launched on 21 December 2007 following the Winter Solstice at Newgrange.

The Newgrange Coin Set is available to purchase, for more information email BoyneValleyTours@gmail.com or click on the "Make an Inquiry" botton below.

The limited edition Annual Mint Set of just 30,000 pieces was produced by the Central Bank in collaboration with the Office of Public Works and celebrates the ancient passage tomb at Newgrange. Governor of the Central Bank, John Hurley presented the first set of 2008 coins to the Minister of State at the Department of Finance, with special responsibility for the Office of Public Works, Noel Ahern, T.D.

Speaking at the launch Minister Ahern said “I am very pleased to be here today at Brú na Bóinne for the launch of the 2008 coin set. The linking of our heritage sites with the coin set is of major benefit to both the OPW and the Central Bank. Indeed it is particularly fitting that we are here this year, the 40th anniversary of the discovery, by Professor Michael O’Kelly, of the rays of the rising sun on Winter solstice day shining through a special aperture to illuminate the chamber at Newgrange. As you all know this site is one of only two World Heritage sites in the Republic of Ireland and is without doubt a very special and unique place”

The Governor of the Central Bank, John Hurley, said “The Bank is delighted to launch our sixth and final set in the Heritage Series of Annual Mint Sets for 2008 honouring Newgrange. It is fitting that what is possibly our most famous Heritage Site has been kept until last. Our annual mint sets travel far and wide across the globe and I have no doubt that these Newgrange coin set will be recognised and admired around the world ”

This is the last in the series of Heritage coin sets produced by the Central Bank in collaboration with the OPW featuring some of Ireland’s national monuments, parks, gardens and nature reserves. Previous coin sets in the Heritage series have featured the Casino at Marino in Dublin, Reginald’s Tower in Waterford, Heywood Gardens, Co. Laois, Glenveagh National Park & Castle, Co. Donegal and Dún Aonghasa Inis Mór, on the Aran Islands.

The 2008 coin set also features a brief history of the Newgrange chamber and passage. In fine weather conditions, Newgrange is illuminated by the winter solstice sunrise at dawn from the 19th to the 23rd of December. A shaft of sunlight shines through the roof box over the entrance and penetrates the passage to light up the chamber. The dramatic event lasts for 17 minutes.