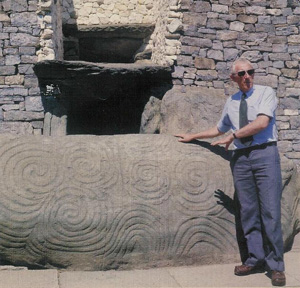 Professor Michael J. O'Kelly excavated and restored the megalithic passage tomb at Newgrange from 1962 to 1975. He discovered that the builders of Newgrange deliberately oriented the passage so that each year around the time of the winter solstice, the rays of the rising sun would shine through a special aperture he called a roofbox to illuminate the chamber.

Michael J. O'Kelly was born in Abbeyfeale, Co. Limerick. Professor O'Kelly was known as Brian to his family and friends. His mother picked the name Brian, but he was christened Michael Joseph. His mother refused to accept the name Michael Joseph and called his Brian. He attended secondary school at Rockwell College, Tipperary and entered University College, Cork, as a student of engineering in 1934, a year later he switched to architecture.

Seán P. Ó Ríordáin, Professor of archaeology at UCC was looking for a surveyor as he engaged in the excavation of the ring-fort at Garranes, Co Cork. Michael J. began work there in the spring of 1937 and later that year moved on to the neolithic site of Lough Gur. Ó Ríordáin's enthusiasm wooed many to the cause of archaeology and in that summer of 1937, Michael J. proved to be a ready convert. The new recruit returned to UCC that October, as a student of Ó Ríordáin's, in the faculty of archaeology. By the time Michael J. graduated in 1940 with a first class honours degree in archaeology he had trained as an engineer, surveyor and architect and had taken courses in Irish, geology and geography, all of which uniquely qualified and equipped him to take on the challenges that Irish archaeology would present in the second half of the 20th century. He followed his degree with first-class M.A. 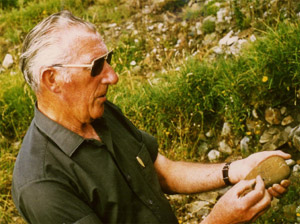 Shortly after securing his M.A., Michael J. was appointed curator of the recently founded Cork Public Museum in Fitzgerald Park. Michael J. and his wife Claire (married in 1945) were involved in building up the displays and dioramas at the museum. The displays were ground breaking with full sized figures, Michael J. supplying the artefacts and Claire making the clothes in faithful reproductions of the originals. Michael J. remained curator of the museum for over two decades.

In 1946 he replaced Ó Ríordáin as head of the Department at UCC, a position he held for thirty-six years. For O'Kelly, teaching was an integral part of his zest for humanity and scholarship, and demanded and received whole-hearted student participation.  By the 1960s O'Kelly was the most highly qualified archaeologist in the country, armed as he was with twenty five years of practical experience – having excavated continuously every summer – and by virtue of being the only recipient of the D.Litt. Degree awarded on foot of published works. 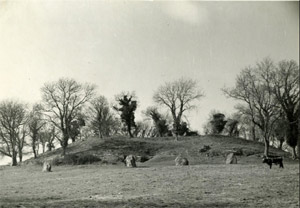 By 1961 Newgrange was in a dilapidated condition and despite the rapidly increasing number of visitors, there was no right of public access. It was becoming clear to many that this, one of the greatest monuments in Western Europe, could not be left in its then condition. PJ Hartnett, the archaeological officer with Bord Fáilte Eireann (Irish Tourist Board) and a former pupil of Professor O'Kelly's, arranged a meeting at Newgrange of all those who had a professional interest in the monument. It was the unanimous agreed at the meeting that Professor O'Kelly should undertake the direction of the excavation, being the acknowledged expert on archaeological excavation and exploration in Ireland.

Excavation commenced in 1962 and continued every summer for a four month season up to and including 1975. The aim of the excavation was to discover as much as possible about the archaeological and historical context of Newgrange and the people who built it and to discover what its original finished appearance was so as to direct a reconstruction, conservation and restoration of the structure to its former condition and appearance.

As part of the early preparation work on Newgrange, Michael J. and Claire O'Kelly travelled to Brittany and Iberia to study at first hand the European background of Newgrange, consulting with the leading experts in those countries on the various features found at Newgrange. The O'Kellys also consulted widely in Ireland and brought in experts in different fields to advise on the restoration of the great cairn of stones which covers the tomb.

The first priority was to examine the cairn slip outside the kerb especially the entrance side (south) of the Newgrange as it was here that repair and conservation was needed urgently. Before excavation could begin trees and shrubs were cleared from the mound. A survey of the mound and the ridge on which Newgrange stands was carried out. 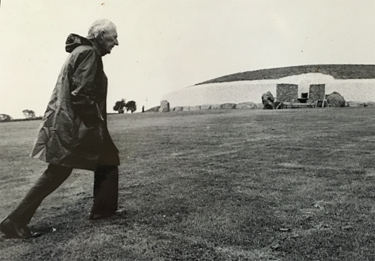 The last year of excavation was 1975, Michael J. wrote "We determined in 1975 that that should be our last season of excavation at Newgrange. We had investigated approximately one third of the structure and we had discovered much about it that was new, both in its structure and in its ornament, while radiocarbon had pushed its date back by 1,000 years. We felt that the other two thirds should be left for a future excavator, who, working with new knowledge and perhaps with better methods and new scientific approaches, should have large areas untouched by us in which to test, check and re-evaluate our findings." From The Restoration of Newgrange by Michael J.O'Kellly. Antiquity LIII, 1979. 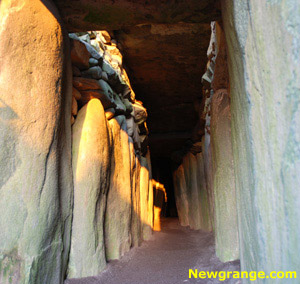 Over the course of the early excavation, some of the many local visitors would often tell the O'Kelly's of a tradition, that the rising sun, at some unspecified time, would light up the triple spiral stone in the end recess of the chamber at Newgrange. Unfortunately, no one could be found who had witnessed this but it continued to be mentioned, the O'Kelly's at first assuming that there was a confusion with Stonehenge and the mid-summer sunrise alignment there.

A conversation between the O'Kellys on the persistence of this tradition, planted in the mind of the Professor that, a south-east orientation would be correct at the mid-winter solstice and that perhaps this tradition was more than a figment of the local people's confused imagination. Abandoning the preparations for Christmas to Claire, Professor O'Kelly made the long journey up from Cork to Newgrange on the day before the winter solstice, the shortest day of the year, to test out his hunch.

Some minutes before sunrise on the 21st of December 1967, Professor O'Kelly stood alone in the darkness of the chamber at Newgrange, wondering what, if anything, would happen. To his amazement, minute by minute, the chamber grew steadily lighter and a beam of sunlight began to enter the passage and to travel inwards, "lighting up everything as it came until the whole chamber – side recesses, floor and roof six metres above the floor – were all clearly illuminated". O'Kelly stood rigid for a while, transfixed by the phenomenon and convinced and fearful in his own imagination that the Dagda, the sun god, who according to the ancient tradition had built the tomb, was about to hurl the roof upon him.

Fortunately the roof remained in place, the sun retreated and he walked from the tomb, the first person to have witnessed the light of the sun penetrate the darkness of the chamber at Newgrange since ancient times. Subsequent work by Dr Jon Patrick, commissioned by O'Kelly, established that the orientation of Newgrange towards the rising sun of the winter solstice was deliberate. He reported that, "It therefore seems that the sun has shone into the chamber ever since the day of its construction and will probably continue to do so for ever." Further observation by O'Kelly established that the spectacle occurs for a number of days before and after the winter solstice. He himself would witness it at least once a year for the remainder of his life.

"Between the bright sky and the long glittering silver ribbon of the Boyne the land looks black and featureless. Great flocks of starlings are flying across the sky from their night time roosts to their day time feeding places. The effect is very dramatic as the direct light of the sun brightens and casts a glow of light all over the chamber. I can even see parts of the roof and a reflected light shines right back in to the back of the end chamber." The recorded words of Prof O'Kelly spoken in the tomb of Newgrange on the 21st December 1969. 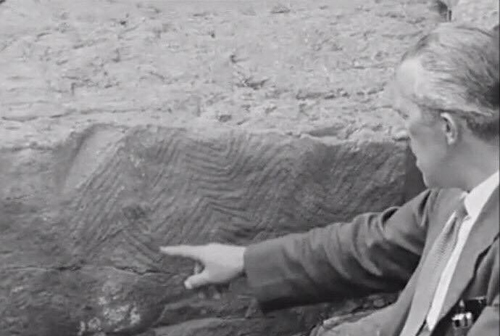 In Newgrange Archaeology, Art and Legend Professor O'Kelly presents the full results of his excavations at Newgrange between 1962 and 1975. Every stage in the excavation, interpretation and restoration of the site is described and illustrated with additional contributions from Claire O'Kelly, who collaborated in her husband's work at Newgrange. This book is a must for anyone with a serious interest in Newgrange, while written for the general reader, it is academic in its approach. 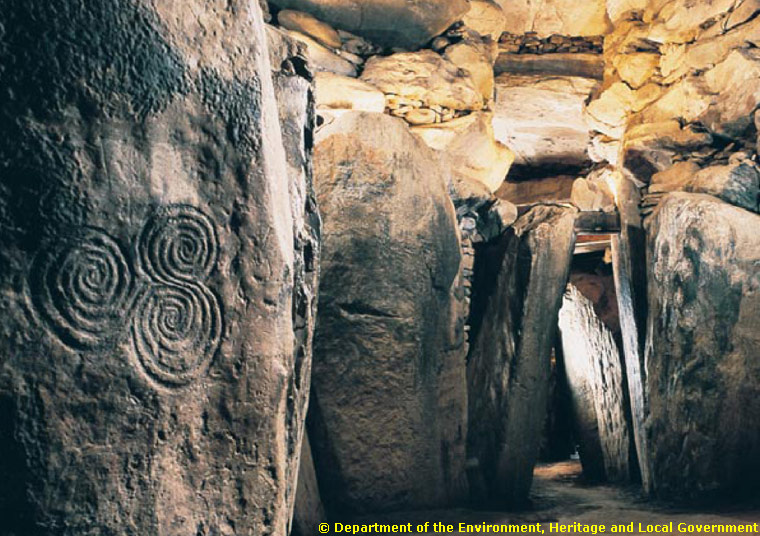