Illustrated Guide to Newgrange and other Boyne Monuments 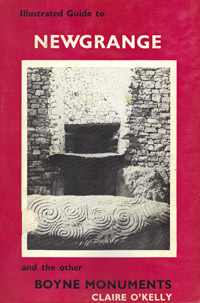 Illustrated Guide to Newgrange and other Boyne Monuments by Claire O'Kelly. Claire studied archaeology under Professor Sean P. O Riordain at University College, Cork. One of her fellow-students was Michael J. O'Kelly, later to succeed O Riordain in the chair of archaeology in Cork. Mrs O'Kelly has been concerned in all her husband's excavations, as well as undertaking independent research on a number of archaeological projects.

This Guide is the result of intensive research into every aspect of the wonderful prehistoric monument that is Newgrange and this third edition (first printed in 1978) brings together all the discoveries made during the excavations, 1962 -1975.

It is half as long again as the previous edition and incorporates completely new material as well as widening its scope to include the other Boyne monuments. These are illustrated by new text figures and new plates.

Newgrange is one of the finest examples, not only in Ireland, but in Western Europe, of the type of tomb known as a passage-grave. Its probable date of erection is about 3000 BC. It belongs to a time when stone, not metal, was the everyday material for tools and weapons. No metal has yet been found in a primary context in an Irish passage-grave.  More ...

Newgrange attracts large numbers of visitors every year. Many of them, in fact the vast majority, come in organised groups so their visit is necessarily of short duration. On the other hand, the monument has a particular interest for students of archaeology, art and kindred subjects and consequently a limited visit with limited guide book in hand has small appeal for them.

In an endeavour to cater for these separate requirements the Guide is divided into three sections. Section I presents a brief summary of the main features of the monument in the order in which they are encountered and tries to answer the questions most usually asked about them. Section II gives a detailed inventory of the ornament, the first time this has been done. Section III fills in the details of the first section - general background, historical references, new discoveries, discussion of techniques, etc., and is for more leisured reading in conjunction with the illustrations. Claire O'Kelly March 1967.

This edition has been enlarged by the inclusion of discoveries made at Newgrange between 1967 and 1970 inclusive. The kerbstones uncovered during that period have been added to the Inventory of Ornament; discoveries relating to the structure of mound and tomb are described and discussed; new dating of passage-graves is dealt with; an account is given of observations made at the time of the winter solstice. The section-drawing of the tomb has been brought up to date and three new plates have been substituted. Claire O'Kelly January 1971.

This edition of the Guide has been expanded by one half as much again from what it was when the second edition appeared. Five further seasons of excavation were yet to come at that time and discoveries made in the course of them are responsible for some of the extra pages. As well as that, two new chapters have been introduced pertaining to the Boyne valley area in general, one of them on its literature and history, and the other containing an inventory of all the known antiquities of the area.

There is a new map of the Boyne passage-grave cemetery, there are seven additional text figures, and new plates have been substituted in seven instances. Claire O'Kelly June 1978.

In this third edition of the Guide I have been greatly helped by the Rev. Colmcille Conway, OCSO, Mellifont Abbey; Dr A. T. Lucas, formerly director of the National Museum of Ireland; an tOllamh Padraig Ó Riain, Colaiste na hOllscoile, Corcaigh; Mr Jon Patrick, formerly of Bolton St College of Technology, Dublin; and especially by my husband, Prof. Michael J. O'Kelly, University College, Cork, in particular with respect to the inventory of Boyne valley sites which is based on his survey, and also for making available much new material in advance of his own publicadon of it.

I am indebted also to Dr George Eogan, University College, Dublin, for most ready cooperation in regard to Knowth. I should also like to thank Mr Shane Sinnott, director John English & Co., for his advice and help throughout the decade since the first edition of the Guide appeared.