People of the Passage Tombs 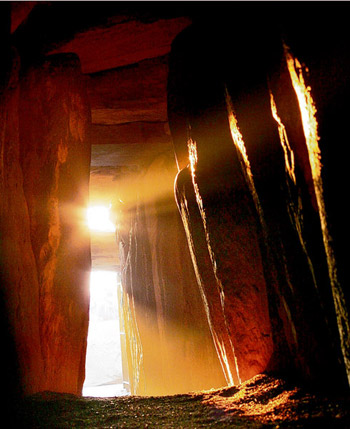 It is damp and chill in the passage grave as the small group huddles together. Waiting. Suspended in space and time. Watching. Apprehensive about the drama about to unfold and yet confident in their preparations.

Outside the throng had grown past hundreds into the thousands. Men, women and children standing in the bitter pre-dawn air. White hoarfrost clings to grass blades, tree limbs, bushes. And yet the cold was welcomed. Still frigid air means no clouds would mar the celebrations.

Finally a murmur went up from those highest up the mound as a rim of light appeared on the horizon. It was time. Soon their offerings would be made, their faces filled with hope. The world had turned. Once again the sun would climb high into the sky.

Who were these people gathered on the hillside at Newgrange, the passage grave built 5,000 years ago in a crook of the River Boyne in Co Meath? Why did they build this colossal monument and what did they expect from it?

Irish archaeologists and scholars have studied the passage graves in Meath for more than 60 years, and antiquarians have visited Newgrange and wondered about it ever since the entrance into the tomb was rediscovered more than 300 years ago. They have learned much about the Newgrange complex, and others linked to it, by studying clues that its makers left behind. They have established that the three primary tombs around Newgrange, including Knowth and Dowth, are part of a much wider network that stretches over many counties and occupies mountain tops at Knocknarea, Slievenamon, Seefin and Baltinglass Hill among other locations, including Tara.

But what of the monument’s architects and builders? Who were they and what caused them to assemble this network at huge cost, in terms of the scale of the undertaking?

The people who built these wonderful monuments are a near total mystery, says Prof Muiris Ó Súilleabháin of the school of archaeology at University College Dublin.

“They are extremely elusive,” he says. There are tantalising clues about activity at the sites at the time they were built, but also for several centuries beforehand at locations such as Baltinglass Hill and Knowth. Yet there is no evidence of a large-scale community having lived near the tomb complex around Brú na Bóinne, the largest and, arguably, one of the most important megalithic sites in Europe, he says.

“One of the great anomalies of the Boyne Valley is the contrast between the magnificent and enduring ritual monuments and the somewhat ephemeral evidence for daily life,” he says. The region has been studied using radar, aerial photography and, of course, on the ground over decades. “Nevertheless, there is no evidence of a large-scale settlement such as would explain the organisation and sophistication indicated by the tombs. So the people of the Middle Neolithic remain elusive,” says Ó Súilleabháin.

Building the passage graves was a mammoth undertaking and would have required a great deal of labour over a prolonged period of time. We typically think of Brú na Bóinne as the focus of this activity, but there are tombs as far away as counties Armagh, Sligo and Kilkenny that appear to maintain a geographical alignment not necessarily with the astronomical points of solstice and equinox but with the other tombs.

This indicates that the influence of those who built at Newgrange must have extended over vast areas of Stone Age Ireland. “The network of passage tombs across the countryside, reinforced by the alignment patterns, suggests extensive social control on the part of those responsible for the passage tombs,” says Ó Súilleabháin.

There are layers of complexity associated with the building of and later use of the passage tombs, he says. “One of the difficulties in differentiating evidence of daily life in passage tomb contexts is the care with which the ritual activity was carried out. Traces that were formerly considered to be casually discarded tools or fires lit by work gangs involved in the building process are now known to have been deliberately incorporated as part of the ritual.”

The pyramids were used as tombs for individual kings and important people, but the evidence from Brú na Bóinne, including interred, cremated bones and skulls, shows that burial at these places was communal. There was cremation material there from many individuals, with small deposits that could not have been the full remains left after cremation. This indicates that burial in this context was not a simple disposal of the dead.

Given the very limited space in the tombs, it also seems likely that only small numbers of people entered the confines of the tomb to pursue whatever rituals were performed. “I believe, therefore, that any assemblies there must have taken place outside, with presumably a representative or two journeying into the bowels of the site to perform mysterious ceremonies or commune with the ancestors,” says Ó Súilleabháin. He also believes that those assembled outside likely stayed back from the monument entrance, in the way that a religious congregation today tends not to crowd the altar.

He envisages a lone representative entering the tomb, mindful that the cold interior was peopled by the spirits of the dead. This person, if in Newgrange passage tomb, would have been waiting to mark the turning of the year, the point where the days gradually grow longer and carry the countryside back into the warmth and rebirth of spring and summer.

“I imagine the moment when this person re-emerged to announce possibly that the great solar event had happened and all would be well, or that it had not, a portent of worrying consequences,” says Ó Súilleabháin. Whatever the ritual, these tombs give us a tantalising view of a complex past society.


Christmas comparison Celebrations of 1699 were not that different

The Newgrange monument lay buried and forgotten for thousands of years as Ireland’s population and political landscape evolved. It was not until 1699 that estate workers digging up buried stones from the monument uncovered the entrance.

By then profound social changes had taken place, and yet the local people still had reason to celebrate on a date close to the winter solstice. Christianity had co-opted the festival, now celebrated as the birth of Christ.

“Christmas was the dominant festival in the Christian era in Ireland,” says Crístoír Mac Cárthaigh, an archivist at University College Dublin.

By the time Newgrange was rediscovered the lands around the monument were held by a Charles Campbell, who acquired them after the Williamite confiscations. But the established lifestyles of the local population would have continued.

Farming was still the dominant activity and, as in the UK and on the Continent, housing clustered together to form villages. These would have have been fairly large elsewhere, but not here. “These [in Ireland] would be far smaller. There would have been no churches or shops,” he says.

Land management was structured under the Rundale practices, he adds. “This was effectively a co-operative way of farming where land was held in common.”

The size of your village didn’t matter much once Christmas tide approached, however. “That would have been the biggest festival of the year,” says Mac Cárthaigh. It was unrivalled by Easter or any other Christian festival, partly because farm work was least during the winter months.

This in turn opened up other opportunities, he says. “It was a great time of courtship, right up until Shrove Tuesday.”

The society of the day placed emphasis on social interaction at Christmas, with families coming together much like today, but also neighbours visiting neighbours. It was a time when those within the wider community reconnected and helped define their sense of place with the land and those living on it.

“That was the glue that held the community together,” says Mac Cárthaigh.

A range of practices had their roots in the winter solstice festival, for example hunting for the wren. The hunt was particularly a feature of the southwest, but the idea of the wren as king of the birds is from the pagan tradition and dates back thousands of years, he says.

But as Christmas descended upon the people living within the loop of the River Boyne that encompasses the Newgrange, Dowth and Knowth monuments, the holly and ivy decorations and the feasting and drinking would have looked very familiar to us all.