About 200 people gathered outside the entrance to Newgrange and despite the disappointment of the obscured sunrise and the bitterly cold wind there was an air of celebration with good wishes shared between friends old and new. It was after all the turning point of the astronomical year, a time to celebrate the end of shortening days and the beginning of lengthening days.

The Winter Solstice at Newgrange was not streamed live on the internet in 2009. An achieve video of the 2007 solstice illumination is available as a full length 1 hour video or a shortened compilation by Victor Reijs. More ... 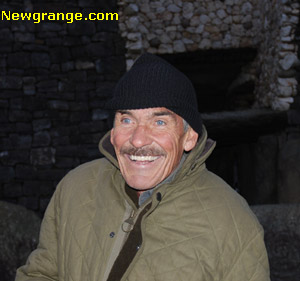 Many of the speakers and attendees from the very successful Winter Solstice Conference held on the 20th of December were at Newgrange for the solstice, Martin Brennan the main speaker at the Conference was clearly trilled to be back in Ireland after 25 years.

Martin is now living in Mexico where he is studying Mayan symbols which have many similarities to the megalithic symbols of the Boyne Valley. Commenting on the doomsday predictions for 2012, Martin says that the Maya did not predict doomsday for 2012 and that all of the hype and hysteria surrounding a supposed Armageddon event coinciding with Winter Solstice 2012 has no basis in the Mayan writings. He said there was strong synchronicity between the Mayan calendar and Newgrange and the ancient monuments of Ireland. "Basically Newgrange was being constructed when the Mayan calendar begins. Our job is to show that Newgrange has been here for 5,200 years and that it’s going to be here for another 5,200 years. There’s no need to panic whatsoever." 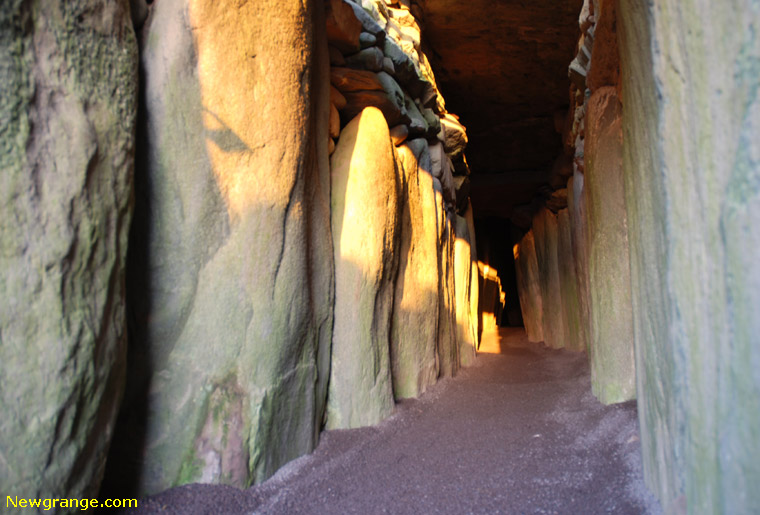 A glorious Winter Solstice Illumunation from the 21st December 2006

The solstice lottery winners on Sunday December 20th were winners on the double when the sun burst through the low cloud and filled the chamber with golden sunlight. The following is Elaine Keogh's report as printed in the Irish Independent - December 2009.


Solstice viewers 'walk in the path of our ancestors'

Its popularity at one time threatened to close Newgrange, the country's most famous stone-age passage tomb, to the public. And as crowds flocked to watch this morning's sun rise on the winter solstice, the 5,000-year-old site proved that it is still a massive attraction.

The ancient chamber is also flooded with the light of the rising sun for a number of days either side of December 21. And yesterday, 10 lucky winners of a lottery got to view the winter sun illuminate the inner chamber of the national monument. Amongst the lottery winners who watched yesterday's spectacular event were Luka Walshe (14) and his mum Mary from Dublin. "It was brilliant, it was really great. It's not very big and it is kind of surreal, but it's amazing," he said afterwards.

Also relishing the once-in-a lifetime experience was Joy Quintana, the deputy to the ambassador to Ireland from the Philippines. "It was very exciting and a rare privilege to experience," she said. Roquena Domingo, who is staying in Ireland for the festive season, said: "It is very intense to think that since it was built 5,000 years ago, that people have been seeing the solstice here and you can feel that connection."

Celebrating the end of the winter and the start of the Celtic New Year were druids Annette Peard and Anne-Marie Murphy, from Tara, Co Meath. "It's a great opportunity to celebrate and honour the light coming back to the Earth," said Anne-Marie, who is from the Acorn druidic grove. Annette said each of the sacred sites, such as Newgrange, Tara and Loughcrew, marked a different event in the year such as the solstice or equinox. "Each site had a role, but they were inter-connected," said Annette, from the Queen Tephi of Tara grove. "It is an honour to walk in the path of our ancestors," she added.

Around 235,000 people visit Newgrange and its neighbouring passage graves at Knowth and Dowth each year. And in the 1990s, there was concern that the numbers were not being controlled and Newgrange, the most popular of the passage graves, would have to be closed to the public. However, those fears proved to be ungrounded, because the number of visitors to the tomb has been spread more evenly throughout the year since the Bru na Boinne visitor centre was opened 12 years ago, according to the centre's manager, Clare Tuffy.

"There are fewer people visiting Newgrange now than 20 years ago and since the centre opened (in 1997) the visitors are stretched out throughout the year; it is no longer a seasonal event," she explained. "One of the most positive aspects of it is that it has restored the monument to its rural setting, you can hear the birds sing now, whereas before you wouldn't because of the sounds of the buses and cars."

"Twenty years ago, people were talking about closing it but now it's not a topic for discussion," she added. The prospect of waiting lists to view the solstice being booked out 10 years in advance led to a decision to hold a lottery for tickets and 32,995 people from all over the world entered this year's draw. 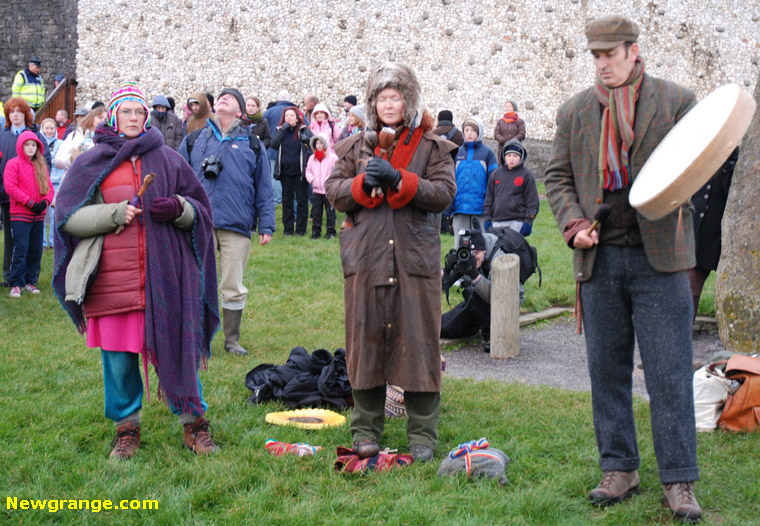 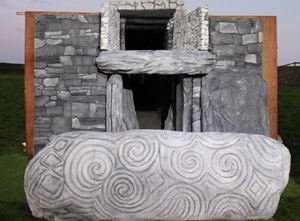 Niall Martin from the Nationwide RTE TV programme conceived a project to re-create the Newgrange lightbox, passage and chamber at the Winter Solstice. The Lightbox is an opening above the entrance to Newgrange, Archaeologists refer to it as a roofbox. The Lightbox and passage are aligned to direct the light from the rising sun around the Winter Solstice down the passage and light up the main chamber.

In consultation with Clare Tuffy the manager at Brú na Bóinne, it was agreed to build the Newgrange replica on December 16th on the actual Newgrange site and leave it there until the morning of December 18th. So there were 2 chances to film the lightbox in action on the mornings of the 17th & 18th of December.  More ...