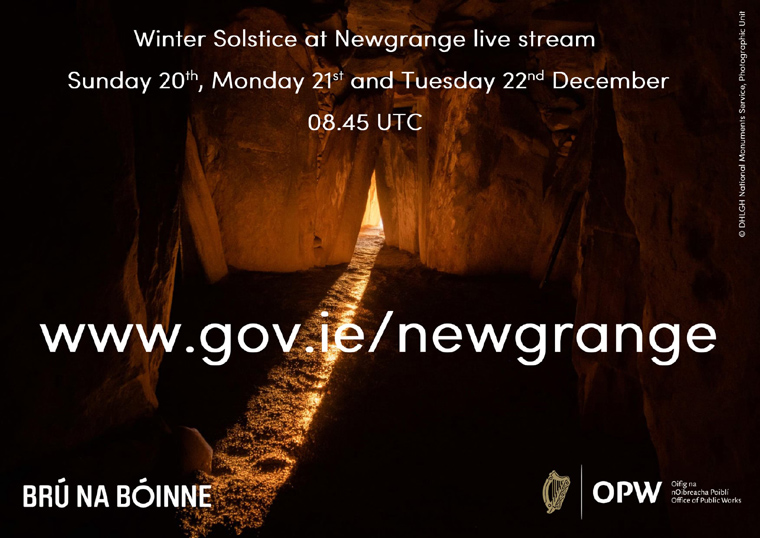 The Office of Public Works' annual Winter Solstice gathering at the Neolithic Passage Tomb of Newgrange on 21st December has been cancelled this year, due to ongoing COVID-19 restrictions.

The hugely significant Solstice Sunrise event will be live-streamed from within the Chamber, on the 20th, 21st and 22nd of December, so that everyone will be able to experience this wonderful phenomenon from any location around the world.

Members of the public are advised not to travel to Newgrange on the morning of the Winter Solstice as access to the site will not be facilitated. 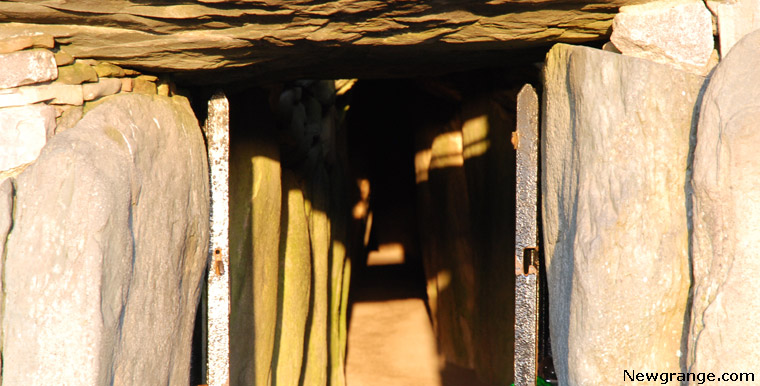 Sunbeam in the passage leading to Newgrange chamber.

Watch the Winter Solstice Live from Newgrange on Wednesday December 20th and Thursday December 21st from 8.30am to 9.15am. Experience the wonder, as out of the morning's darkness a single ray of light illuminates the passage tomb, marking the end of winter and the start of new life.  More ... 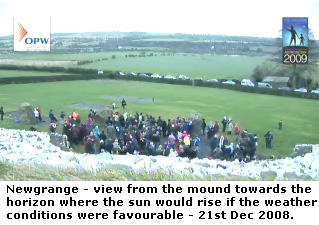 The expected Winter Solstice illumination of the passage and chamber at Newgrange was streamed live on the internet by the OPW (Office of Public Works).

Unfortunately it was a dull damp morning at Newgrange on December 21st, the shortest day of the year. Cloudy skies prevented the sun's rays from illuminating the passage and chamber of the 5000 year old mound at Newgrange. The OPW had to incorporate clips from the 2007 webcast into the live 2008 webcast.

Here is a six minute Compilation of the 2007 Solstice by Victor Reijs.


Newgrange is best known for the illumination of its passage and chamber by the winter solstice sun. Above the entrance to the passage at Newgrange there is a opening called a roof-box. This baffling orifice held a great surprise for those who unearthed it. Its purpose is to allow sunlight to penetrate the chamber on the shortest days of the year around the winter solstice.

At dawn, from December 19th to 23rd, a narrow beam of light penetrates the roof-box and reaches the floor of the chamber, gradually extending to the rear of the passage. As the sun rises higher, the beam widens within the chamber so that the whole room becomes dramatically illuminated. This event lasts for 17 minutes, beginning around 9am.

Newgrange's accuracy as a time-telling device is remarkable when one considers that it was built 500 years before the Great Pyramids and more than 1,000 years before Stonehenge. The intent of its builders was undoubtedly to mark the beginning of the new year. In addition, it may have served as a powerful symbol of the victory of life over death.

Each year the winter solstice event attracts much attention at Newgrange. Many gather at the ancient tomb to wait for dawn, as people did 5,000 years ago. So great is the demand to be one of the few inside the chamber during the solstice that there is a free annual lottery (application forms are available at the Visitor Centre). Unfortunately, as with many Irish events that depend upon sunshine, if the skies are overcast, there is not much to be seen. Yet all agree that it is an extraordinary feeling to wait in the darkness, as people did so long ago, for the longest night of the year to end.

An article by Eimear Ni Bhraonain of the Irish Indpendent - December 22nd 2008.

Hundreds of winter solstice watchers were left disappointed yesterday as the sun failed to shine on Newgrange. Dull weather prevented the light shining into the 5,000-year-old burial chamber as dawn broke on the shortest day of the year.

Environment Minister John Gormley -- one of 19 VIPs and lottery winners allowed entry to the Neolithic chamber -- didn't get the blame for the sun failing to shine at the ancient Co Meath site. But the Green Party leader was heckled over his failure to reroute the M3 motorway from historic cultural sites at the Tara and Skryne Valley.

"When you come out Minister John Gormley, will your hands be untied?" shouted Heather Buchanan, from Co Meath. "He talks about sacred land but he doesn't practise what he preaches. I want to know what his intentions are going into the chamber, what does he hope to achieve by entering the chamber? What does he feel coming out of the chamber, I'd love to know, I'm sure the whole nation would love to know that."

Others among the eclectic gathering, who were attempting to meditate before sunrise, accused Ms Buchanan of "ruining" the event. "Later on, you could have had your chance, but now you've ruined the whole morning for me. Talk to him [John Gormley] afterwards. Don't ruin it for everybody else," said one woman.

When Mr Gormley emerged from the passage tomb, he was confronted for a second time by two protestors. In response to their criticisms, he told the Irish Independent that he had "no problem" with them but added it was not the "right place".

"It's a day which requires people to meditate and that, I don't think, is actually appropriate. It's not the place to shout, that's my view," he said. Justice Minister Dermot Ahern was also among the chosen few to enter the monument. Although the ray of light failed to show, he said the experience was "fascinating".

It was Mr Ahern's first time inside the tomb, despite him living only 20 minutes away in Dundalk. "The last time I was here, I was a child and I didn't get in," he added. Hundreds of people travelled from across the country to attend the event, which was also enjoyed by tourists from the US, England, France and the Netherlands.

Noirin Rooney "stayed up all night" to make the journey from Co Tipperary. "We're here to greet the new dawn, the return of the light," she said. Christine Deady from Co Cork described the experience as "very special". "I'm pretty sure that this is a spiritual momentum, it's the vortex of the year. Also I know that it being the darkest day of the year, for a lot of healers, and people of that persuasion, it's the New Year. This is like New Year's Eve in the spiritual world. I think this means more than the 31st of December," she added.

It was a romantic occasion for one couple, Ed Lyne from Co Kerry and his fiancee Magda Kiarszys, who were celebrating their anniversary at the event. "We got engaged last year on the 21st. We thought we'd come down to see what it was like."